Peggle Wiki
Register
Don't have an account?
Sign In
Advertisement
in: Characters, A to Z, Masters,
and 4 more

Bjorn is the first Peggle Master the player mets in every single game of the franchise, and is the headmaster of the Peggle Institute. He is featured in all Peggle games so far.

As an unicorn, Bjorn is a magical horse with one golden, pointed spiraling horn projecting from his foread. He has dark blue-ish eyes, azure mane and white equine coat.

In Peggle 2, his horn glows in all the rainbow colors when Super Guide is activated.

In Peggle Blast, he wears aviator goggles on his forehead. When Super Guide is activated, their lenses glow in all the rainbow colors.

Bjorn's unique ability. Can be used after the turn when the player hits a green peg. It draws a clear line that shows where the ball will go. After the player aims, the ball follows the line.

From Peggle 2 on, his power now draws a longer, colorful line or orange line instead of the old blue one, and it prolongs until it reaches two pegs. Otherwise, it works exactly like in the previous versions of Peggle series. 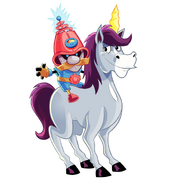 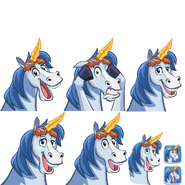 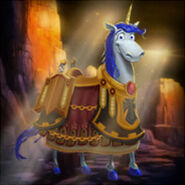