Peggle Wiki
Register
Don't have an account?
Sign In
Advertisement
in: Characters, A to Z, Masters,
and 5 more

Jimmy Lightning is a Peggle Master. He is a member of the Peggle Institute, and the 2nd character to be introduced in the series overall. He is featured in all official Peggle games so far.

In Peggle 2, his design drastically changed with a darker colour palette, a black ear reamer and a lightning bolt tattoo.

In Peggle Blast, his whimsical look from the first games returns, with the only changes being an acorn inside his mouth and a green shirt with a yellow lightining bolt stamp.

Jimmy's unique ability. It spawns a second ball immediately after the player hits a green peg.

From Peggle 2 on, his power spawns two additional balls instead of just one. It is worthwhile to mention that, in Peggle Blast, the multiballs are actually acorns.

Early concept sketches for Peggle Deluxe; Jimmy was originally meant to be a hamster before being confirmed as a gopher 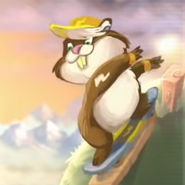 Jimmy's cameo in Tied Together