Peggle Wiki
Register
Don't have an account?
Sign In
Advertisement
in: Characters, A to Z, Masters,
and 2 more

Splork is a Peggle Master from outer space. He is a member of the Peggle Institute, and the 4th character to be introduced in the series overall.

Splork has green skin and a single big eye with red iris. His arms are similar to tentacles, and his feet reminds small tentacles. His normal outfit is a red alien t-shirt with a golden brooch.

Splork's magic power lights up pegs in a large radius around the activated Green Peg. 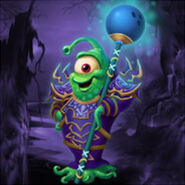