Peggle Wiki
Register
Don't have an account?
Sign In
Advertisement
in: Characters, A to Z, Masters,
and 3 more

Tula is a Peggle Master. She is a member of the Peggle Institute, and the 7th character to be introduced in the series overall. After Peggle and Peggle Nights, she reappears in Peggle Blast with a new magic power called Sunburst.

Tula has the appearance of an anthropomorphic sunflower. Her structure has an orange-brown disc floret, yellow petals and a green stem, plus two leaves that are used as hands. Tula's always portrayed wearing a reddish lipstick.

In Peggle Blast, Tula wears a translucent light-blue raincoat and a red rain hat with a small yellow flower over it. She also wields a red umbrella with a silver shaft.

In Peggle and Peggle Nights, Tula's power lights up orange pegs around the green pegs you hit. When this event happens, little smiley flowers light 20% of the remaining orange pegs on the level (the closest ones to the green peg).

In Peggle Blast, Tula's power lights up a concentrated ring of sunlight to fill the shot following the activation of a green peg, similar to the Ring of Fire's circle. Upon the tap of the screen, the area will explode with sunlight causing all pegs in the lighted area to transform into flowers; thus activating them for the progression of the level. 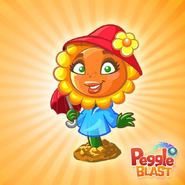 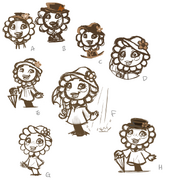