Peggle Wiki
Register
Don't have an account?
Sign In
Advertisement
in: Characters, A to Z, Masters,
and 3 more

View source
watch 01:40
The Sandman Will Keep You Awake - The Loop
Do you like this video?
Play Sound

Warren is a Peggle Master currently working as manager. He is a member of the Peggle Institute, and the 8th character to be introduced in the series overall.

Warren is a white rabbit with fuchsia pink eyes and big front teeth. He wears a dark purple magician outfit, dark purple stovepipe hat, and a red bow tie. In Peggle Blast, both his outfit and hat have glitter.

In Peggle, Warren's power spins a wheel, granting the player one of four possibilities: the Magic Hat ability, Triple Score, an extra ball or a random Magic Power. In Peggle Nights, the extra ball is replaced with another Magic Hat.

In Peggle Blast, his power is automatically used at the start of the level, as it just summons a different master who will actually be the one assisting the player through the level. 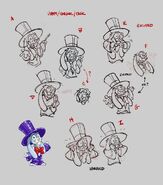